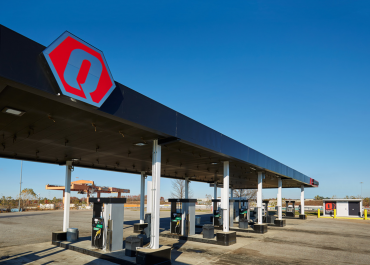 Quick Fuel is a 4th-generation family-owned business operating 52 automated commercial fueling stations and 200 mobile fueling trucks. Like most card-lock locations, 80-90% of Quick Fuel’s business was conducted between 5am-6pm through fleet card transactions and anchor accounts. By installing Skyline retail price signs and using PriceAdvantage to optimize retail fuel prices, Quick Fuel was able to increase fuel sales by 186% per month at just one location alone – and projects as much as 30% additional growth.

Benefits of the PriceAdvantage / Skyline combination:

Quick Fuel sells two things: fuel and time. At most retail locations, it can take as long as 24 minutes to fill a normal delivery truck. But thanks to advanced technology and high-volume pumps, Quick Fuel can fill a truck in as little as seven minutes. The Quick Fuel team knew that by adding a retail price sign – they would attract new retail and commercial customers who would appreciate competitive fuel prices and rapid service.

Josh selected Skyline price signs for a number of reasons. First, only Skyline signs boast a proprietary, patented technology that supports full loop automation - communicating that requested price changes were indeed made. Next, the quality of the Skyline signs – including legibility, LED longevity, automated brightness control, and advanced diagnostics – justified the investment. Josh shared, “I know that investing in great technology gives us a competitive advantage. I may have paid slightly more for Skyline signs – but it was worth it due to the quality, integrations, and superior customer service."

Quick Fuel installed its first Skyline price sign at its Lamar Road facility in Memphis, TN during December 2015. Initially, Quick Fuel calculated that the ROI on their Skyline sign investment would require 16 months – it actually only took 7.9 months. Fuel volume increased 49.7% from December to March 2016. Even more significant was the 186% YTD increase in fuel volume for March 2016 as well as a 36% increase in total gross margin. A Skyline sign was installed at a second, high volume Quick Fuel site during December 2015. That site generated a 15% year-over-year increase - nearly maximizing that site’s output capacity!

The combination of PriceAdvantage and Skyline price signs has proved itself as a catalyst for growth. Quick Fuel will install Skyline signs to 12 additional sites in 2016 AND added a pricing analyst to their team. This pricing analyst will utilize PriceAdvantage to delve deeper into analytics, ensure they are where they need to be in the market, help drive business, and continue growth – freeing Josh and the other team members to focus on other business initiatives.

This website uses cookies to improve your experience while you navigate through the website. Out of these, the cookies that are categorized as necessary are stored on your browser as they are essential for the working of basic functionalities of the website. We also use third-party cookies that help us analyze and understand how you use this website. These cookies will be stored in your browser only with your consent. You also have the option to opt-out of these cookies. But opting out of some of these cookies may affect your browsing experience.
Necessary Always Enabled
Necessary cookies are absolutely essential for the website to function properly. This category only includes cookies that ensures basic functionalities and security features of the website. These cookies do not store any personal information.
SAVE & ACCEPT