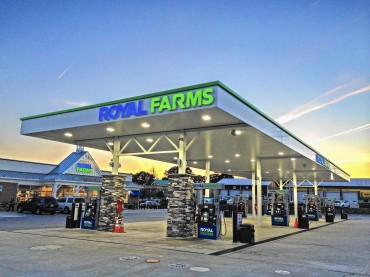 Royal Farms Plows Operational Costs Down and Drives Profits Up

“We saved half a penny per gallon, driving record fuel sales and profitability in the first year. This was largely due to automation with PriceAdvantage software and Skyline electronic price signs.

With stores in Delaware, Maryland, Pennsylvania and Virginia, the company struggled to regulate prices and implement a single-minded pricing strategy across the region, which stunted fuel profitability and gallons performance. Although the company received daily competitive pricing surveys through PDI’s competitive report, several stores would inevitably fail to submit their daily reports. Sometimes it would take days to gather the necessary information from lagging stores. “We would have to call back three times to speak to the store manager. It was taking two people half a day every day to get through the fuel pricing process,” recounts Rinehart.

Partnering with PriceAdvantage, Royal Farms restructured fundamental operations and streamlined key processes to maximize overall gross profit on a per store basis. The first step was to put fuel pricing strategy back in the control of the home office. This improved pricing consistency and increased profits significantly.

Manual price changes presented additional challenges. First of all, it took 12–72 hours on average for a price change to be implemented. Often, if a price change was announced on Friday evening, the change would not be implemented until Monday morning. Lost revenue estimates were staggering. Secondly, changing the price signs manually took employees away from their most important task (serving customers) for more than 30 minutes. Thirdly, worker’s compensation claims related to physically updating price signs chipped away at profits.

Rinehart implemented Skyline’s electronic price signs so prices could be changed from inside the store. Employees no longer had to brave wet or icy conditions or bear summer’s stifling heat and humidity to update prices. Stores embraced the new electronic signs. “Soon, other stores began asking when they would be getting these signs,” said Rinehart. The solution increased convenience for in-store employees, minimized injury risks, and curtailed customer-facing disruptions, allowing employees better serve customers.

The human factor could not be ignored either. Delayed price changes and data entry errors prevented the company from realizing higher profits. “We discovered that 25–50 percent of the stores had not made price changes from the previous day,” recalls Rinehart. “And, once a month a store would enter a price like $.25, and we’d be selling fuel at a quarter for half a day.” To make matters worse, some store managers arranged unsanctioned “friends and family hour” during which time fuel prices were deliberately discounted.

Clearly, the company needed to find a way to better regulate store operations and safely expedite and confirm price changes.

Rinehart automated price changes in a closed-loop system using PriceAdvantage fuel price management software. This allows Rinehart to make price changes to all 95 stores in a matter of minutes, and receive confirmation that the changes took place. “We were able to calculate the increase in profitability with the electronic price signs, but adding the fuel pricing software is when we saw the real returns,” said Rinehart. “There is an art to fuel pricing. You can’t replace your strategy with an algorithm. You can, however, gain a strong competitive advantage by automating the execution of your strategy.” He added, “This market is a penny-up, penny-down game. PriceAdvantage gives me all the information I need to create the optimal price for each store, and then have it posted at the street quickly.”

Price Changes in Minutes, Not Days

Royal Farms expected and achieved tangible, measurable results from their modernization and automation efforts. “We now have market knowledge, a centralized strategy, confirmation of price changes and evidence to prove it. What used to take 12–72 hours per store now takes less than an hour for all 95 stores,” stated Rinehart. “We saw a return on our investment in half the time I had originally estimated. We made changes that let us focus on beating the competition and maximizing our profitability for every store, every day.”

The modernization project also improved corporate culture, an unexpected secondary effect. By removing barriers, simplifying processes and increasing transparency, store managers are more compliant, shifting their positions from “Corporate will never know” to “Let’s get it done.” Store managers have embraced the changes because the modernizations have made their lives easier and because there are enforceable consequences for noncompliance.

This website uses cookies to improve your experience while you navigate through the website. Out of these, the cookies that are categorized as necessary are stored on your browser as they are essential for the working of basic functionalities of the website. We also use third-party cookies that help us analyze and understand how you use this website. These cookies will be stored in your browser only with your consent. You also have the option to opt-out of these cookies. But opting out of some of these cookies may affect your browsing experience.
Necessary Always Enabled
Necessary cookies are absolutely essential for the website to function properly. This category only includes cookies that ensures basic functionalities and security features of the website. These cookies do not store any personal information.
SAVE & ACCEPT